Harvest and the subsequent ploughing seemed late on the Humber this year, and numbers of LBBs in the fields had been hard to come by. Finally, things changed however, and after the pleasant sight of 11 michs in a field south of Swinefleet, I came across another 6 by the A161 near Eastoft, along with a snouty adult Caspian Gull. To say the views were disappointing would be an understatement, the heat-haze coming off the freshly turned earth was like treacle, but it was a hell of a bird, and not the same as the one at nearby Goole in late July.
Fortunately the skies were greyer and the haze much reduced in the Midlands, and views of the gulls on Albert Village Lake were much better. I only had an hour as I had to get back home to pack the car for a family camping holiday, but the usual 2cy Caspian Gull was soon located, along with c20 michs. Many of the 2cy LBBs had now almost completed their primary moult, so I was hardly bothering to search for black primaries, instead trying to pick out a 2cy with a pink-based bill, to get better views of the previous week's Baltic.

Amazingly, after twenty minutes, I picked up such a bird: a small 2cy LBB-type with a two-tone, pink-based bill, a whitish head with streaked neck-sides, dark blackish-brown upperparts without much in the way of visible patterning, and those jet-black primaries. So far so good. I rattled off a few shots on my phone, but after less than two minutes, it flew. I tried to stay on it with the video, but unbelievably the phone rang, cutting off the recording! The perils of phone-scoping!
The bird had gone, and I was not much better off than before. I reviewed the video, and a smile crept across my face - it wasn't last week's bird, it was better than last week's bird! Like before, the secondaries and greater coverts showed no signs of moult, and there was a nick in the middle of the trailing edge of the wing resulting from missing feathers. But this bird's nick was bigger: P2 was missing and P1 was nearly 3/4 grown, a dark grey-black feather with a broad white tip, a 3rd-generation primary. So it was slightly ahead of the previous bird (but a week on, so maybe not that much more advanced), but it was what was going on at the other end of the primaries that had made me smile: the 2nd-generation P10 was only half grown, indicating that the juvenile outer primary had only recently been shed, so there were two simultaneous moult-waves going on! Staffelmauser!

This moult pattern has never been recorded in (ringed) western LBBs, and indeed it is considered that any 2cy that has shed P1-3 by August can be considered an acceptable fuscus. But does that mean any will get accepted...?! 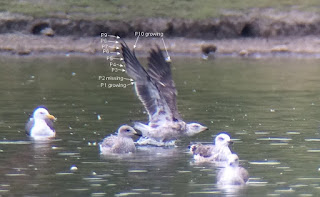 After drawing a blank a few weeks ago, I still couldn't resist a quick look en route from Teesside to Goole, and I was glad I did: 1000 large gulls roosting on the airfield under alternating cloud/ hazy sunshine. Following an encounter at the end of last winter, I viewed from the verge rather than the airfield itself, and the views were just as good.


As usual the majority were Herrings, but very early on I scanned onto a familiar looking juv, all sepia tones and simple coverts, white head and awkward posture - a juv Caspian Gull! It was busy preening, and never gave me a satisfactory profile, but everything was right, and views of the spread tail and underwing showed everything you'd want to see.


I went back to scanning the flock as more birds poured in off the tip, but pickings were slim: 2 juv michs the highlight until a sense of deja-vu hit me - another, dinkier juv Caspian Gull at the back of the flock! It immediately sat down and went to sleep, but as I got my phone video on it, it woke up and flew off, revealing a dazzling white underwing. Something about it made me think it might just have been the bird from Roos last month...
Posted by Unknown at 13:22 No comments:


Lying in bed, scrolling through the 400+ images I'd taken on my phone at Albert earlier in the day, I suddenly noticed an almost complete set of 2nd-gen primaries on a spread wing in the background of one of the pictures. I'd been photographing a flapping 2cy mich, but beyond it, at the back of the flock, about half a dozen shots showed a dark-looking 2cy gull having a stretch and a flap, then it drifted out of frame.
I zoomed in, I went back and forth across the handful of shots, and it all looked right for fuscus - another late July 2cy Baltic Gull! The primaries were all 2nd-generation, confirmed as such by the presence of tiny mirrors on P10, a feature not infrequently seen on Baltics, with the exception of P1, which was a half-grown 3rd-generation feather, the tiny white tip peeping out from under the coverts. The secondaries were the now-familiar neat line of new, broadly white-tipped feathers, and the greater coverts were complete too, looking a bit worn and brown, but both these tracts lacked the moult gaps of virtually every other 2cy present. The lesser and median-coverts show a bit more variation, with a few darker, presumed newer feathers present, but all appeared to be plain or only simply-patterned, unlike the anchored and barred equivalents on nearby 2cy LBBs. 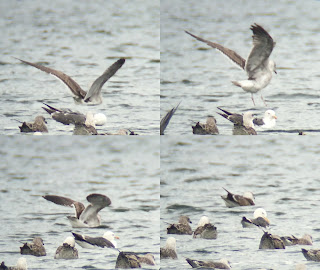 Further details were difficult to detect, but the bill looked markedly two-tone, with a pinky base and dark tip, and the legs looked pink too. The iris appeared to be dark, and the underparts whitish with some streaking around the neck-sides. The tail showed extensive dark in the tip, but again detail was non-existent in the images, and moult appeared to be nearly complete. This combination further indicated that it was indeed a 2cy, and in that state of wing moult, any other ID options seemed unlikely.
Just wish I'd seen it!
Posted by Unknown at 15:11 No comments: 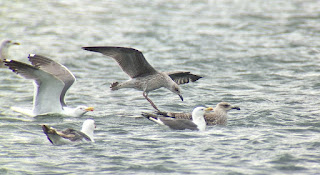 Only a few weeks in, and I was already feeling guilty for having "missed" the previous week due to working elsewhere. So it was good to get back, and on arrival late morning there were a good number of gulls on the water again. Michs provided the main interest once again, with at least 22 present, the half dozen irresistible juvs performing well in the flat grey light. Despite the increase in juvs of other species, the michs stood out due to their increased wear and the presence of at least a couple of newly moulted scaps on every bird. 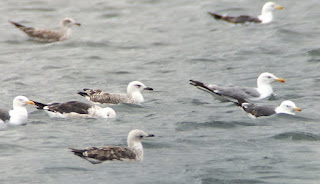 A juv Med Gull appeared amongst the Black-heads in the bay, and later on a smart near-ad Caspian Gull flew in for a quick wash before unfortunately transferring to the inaccessible area over the bank. Fortunately the iPhone's video managed to pick out a few crisp frames of the wing-pattern. 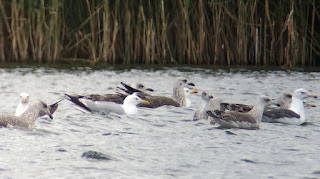 Despite a shortage of large gulls on the fields thus far this summer, a walk down to the moors edge in the evening in search of passage waders resulted in a small pre-roost gathering. 17 LBBs and 3 ad michs made a nice surprise, and minutes later an even nicer one joined them: a smart ad Caspian Gull, just a shame about the fading light.
Posted by Unknown at 14:28 No comments:

Well that was unexpected. Just back into a bit more regular gulling, but driving to work in East Yorkshire, and came across an early morning post-roost flock of c100 Herring Gulls. Onto the verge, quick scan, and a sleeping juvenile that instantly shouted Caspian Gull! The dingy colouration, long narrow scaps, long legs and wings, and cracking greater coverts were all spot on. When it woke, the pale head, narrow bill and indented eye added to the look - what a bird! 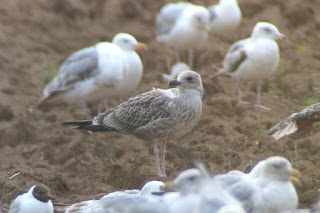 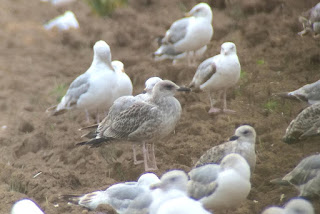 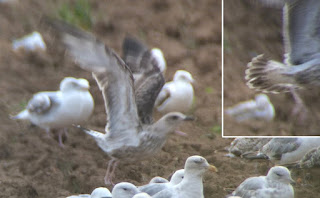 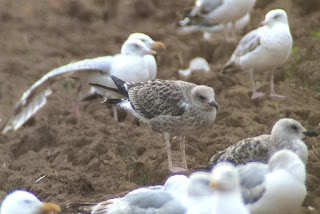 It's the same every summer, I never mean to stop gulling, but work gets busier and takes me to laridly less-trodden places. Therefore a smart 2cy Caspian Gull at Roos, East Yorkshire, in the bright shimmer of a late April afternoon was a nice surprise, and the last decent gull for a few months. 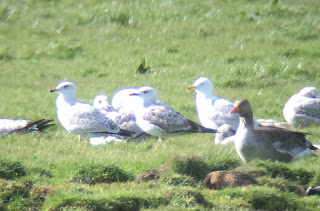 And so to July, and the end of the main thrust of breeding bird surveys, and a chance to check in on a gull site or two. The 9th was a frustratingly sunny affair at Albert Village Lake, but c800 LBBs were present, and accompanied by not one but two 2cy Caspian Gulls. There were also a dozen michs, including at least 3 cracking juvs, that would have been my first of the year were it not for a wholly unexpected flyby at South Gare the day before! 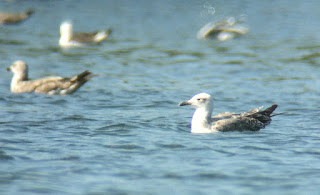 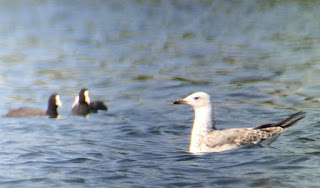 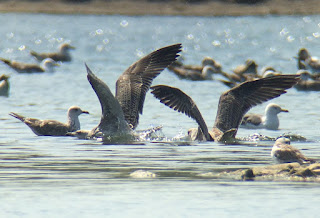 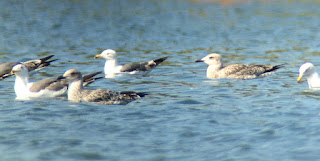 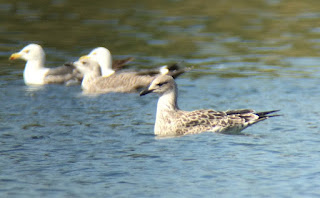 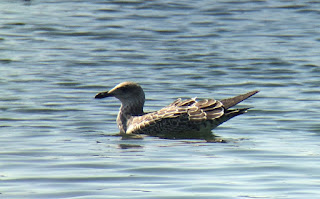 A week later I was back, better light but alas fewer and flightier birds. The more distinctive of the two Casps was present throughout, and remarkably a 3cy made an all too brief visit. Again the michs provided much of the entertainment though, with probably 15 birds during the session, at least 5 of them juvs. But already there were a handful of juv LBBs and 2 juv Herrings present. 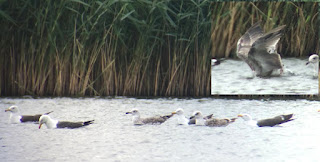 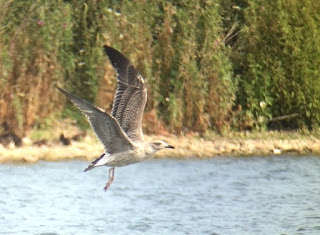